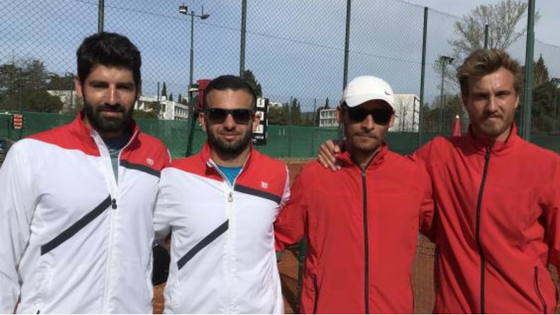 Team Malta make it to the play offs in Davis Cup

The men’s tennis national team lead by our head coach and Malta’s best tennis player Matthew Asciak, together with Omar Sudzuoka, Denzil Aguis and Matthew Cassar Torregiani made a superb performance in the Davis Cup (world cup of tennis) last week in Montenegro.

They started off strong when they brushed aside Kosovo 3-0, and went on to beating Moldova (top of the group) 2-1. Malta played Lichtenstein on the third day of Pool B Group B for a place in the playoff for promotion.

In the opening singles rubber, Omar Sudzuka lost to his opponent Robin Forster on a closely fought match 6/3, 6/4. Matthew Asciak was next on in the second singles rubber and was facing Leuch Vital Florin, whom he beat 7/6 6/1.

In the third and final deciding rubber Matthew Asciak teamed up with Omar Sudzuka and went on to win the first set 6/3, but didn’t manage to keep it up in the second and third set. However, Pool B Group B ended with Malta topping the Group based on the number of sets won leading the team to participate in the playoff for promotion against Monaco, the winners of Pool B Group A.

Malta played the play off against Montenegro, which proved to strong for our team.

We are super proud of our team for a fantastic week in Davis Cup!