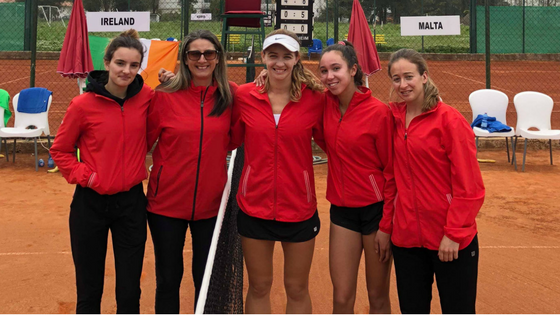 What a week it’s been for our pro players Franesca Curmi and Elaine Genovese at the Fed Cup (World Cup of Tennis) in Montenegro. Team Malta won their group after beating two very strong countries, Morocco and Ireland together with Uganda without dropping a set and became the first team in the history of women’s Malta tennis to reach the play-offs for promotion to group 2.

Francesca who played as the Number 2 player, showed an impressive and consistent performance throughout all her matches, same goes to Elaine who played as Number 1 in both singles and doubles.

Here’s a round up of what happened:

Super proud of our girls leading #teammalta into the play offs for promotion at @fedcuptennis – way to go! Good luck for tomorrow 💪🏼 @francesca_curmi @ele.geno 💥🎾🇲🇹

Our @fedcuptennis Journey comes to an end with an incredible fight against South Africa 1-2.🇿🇦🇲🇹 It’s been a super week reaching the Final for promotion and 2nd place overall! 🥈 Proud moment for #teammalta at the world cup of tennis 🎾 @asciaktennisacademy

Pre match vs. South Africa in the doubles tie…our girls didn’t make it through but we are super proud with your results – first time in play offs for Promotion and 2nd overall! #teammalta @fedcuptennis 🎾💪🏼💥💛 @ele.geno @francesca_curmi

”This is the first time that Team Malta won their group and reached the final play offs for promotion in the world cup of tennis. It has been an incredible journey to reach this stage as we beat two very strong countries – Ireland and Morocco together with Uganda in our group without even dropping a set. In the final against South Africa we battled through but lost 2-1.

It has always been one of my goals to get promoted to group 2 and this time we got very very close. I am super proud of my team, Francesca Curmi, Brenda Galea, Emily Lightfood and our team captain Helen Asciak, whom where supporting us every step of the way. We’ve been working very hard, training on and off the court at the Asciak Tennis Accademy thanks to Matthew Asciak and Dali Suza for their full support and the Malta Tennis Federation. We’ve made Malta proud and it’s an honor to play for our country” Elaine